Good vs Evil: What You Need to Know About Internet Bots

In 2016, bots officially dominated over half of internet traffic.

A bot is a software application that is designed to perform simple and repetitive automated tasks on the internet. There are plenty of good bots out there that help your experience online run smoothly. But, there are also a lot of malicious bots trying to take your website down, and they’re getting stronger.

No one is immune to bots, either, even smaller websites. In fact, smaller websites tend to have the highest percentage of bot traffic, although a majority of that tends to be from good bots.

To a lot of advertisers, bots are the malicious programs that serve hidden ads to spread malware and spam, or generate false ad impressions.

No matter how big or popular your website is, you’re still getting bot traffic. And it’s getting harder to detect, too.

No matter the size of your website, it’s probably seen its fair share of bad bot traffic. But, there are a few different types of malicious bots you need to know about.

These bots will “scrape” content off your website and post it elsewhere without your permission. Chances are, if you fall victim to this type of bot, you won’t know about it unless you specifically search for copies of your content.

Advertisers are generally the most familiar with click bots. These are the bots that intentionally click on advertisements with the goal of skewing data and burning through an advertiser’s budget.

Spam and email bots will spread advertising links and other forms of spam throughout the internet. But, they’ll also collect personal information that users submit through forms, such as phone numbers and email addresses.

Hackers use spy bots for data mining and surveillance purposes. They’ll collect personal information about a company, website, or person, and then sell that information to a rival company or marketing firm.

Download bots are also called transfer bots. They’ll attach themselves to a reputable website, and instead of sending users to the site they requested, download bots will send them to a less trustworthy site.

Zombie bots get their name from their ability to completely take over a computer and still run in the background, thus turning your computer into a “zombie.”

A collection of these hacked computers is what makes up a botnet. Zombie bots use their infected computers to complete their destructive deeds. A lot of targeted group attacks, also known as DDoS attacks, generally come from botnets of zombie bots.

Impersonator bots are also known for their ability to pull off a DDoS attacks. They’re considered the “textbook bad bot” because they’re the most active of the malicious bots. 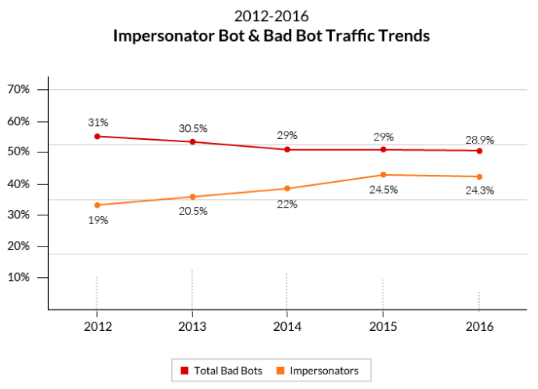 Impersonator bots mask themselves as human visitors in order to get past any site security. While basic site security (such as a CAPTCHA code) was enough to keep these bots out before, they’re growing increasingly sophisticated.

There are three different levels of sophistication in bots: simple, evasive, and advanced. APBs are made up of advanced bots and evasive bots. 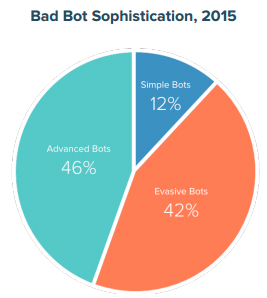 Of these APBs, 61% of them still behave like bots, but 39% are able to mimic human behavior. Bots that mimic humans can tamper with cookies and load external resources.

They’re also capable of browser automation and spoofing IP addresses, which lets them rotate IP addresses so they can obscure their origins (which makes them harder to block).

APBs that mimic humans can also load JavaScript, which many analytical tools rely on to function. This ability means they’re capable of throwing off any metrics measured by these tools. These bots are so good at interfering with analytics, Distil predicts that 53% of malicious APBs will pass as real human traffic.

Not every bot on the internet is out to hurt you. In fact, legitimate bots are actually necessary for your website. They’re what crawl your site pages to determine SERP ranking, and they help generate news feeds to keep you updated in real-time.

In the last year, good bot activity increased from 18.9% in 2015 to 22.9% in 2016. Good bots actually help the internet grow and develop into an easy-to-use, reliable source of information.

These bots are also knowns as “spider bots,” because they’re what search engines use to crawl a web page.

They help to breakdown and analyze all the aspects of a web page in order to determine its meaning and relevance. This information is then used to judge the reliability of a website and also determine its organic SERP ranking.

Feed fetchers and data bots convey content and information between websites and mobile or web applications.

They’re also the bots that will bring you updates on the news, currency exchange, and weather, as well as other real-time data.

These bots are designed to counter the malicious scraper bots. Instead of stealing your content, they search the internet for content that has been plagiarized or copied without permission. Their main goal is to catch the content thieves, and even earn a possible monetary reward for their work.

Online retailers use trader bots to crawl other sites (such as auction sites like eBay and Amazon) in order to gather information on pricing. Trader bots make it easier for these retailers to keep up with their rivals and offer competitive pricing or more detailed product information.

The Continued Advancement of Bots

After a three year decline, bot activity is increasing again. And, with the continued advancement of bots, they’re becoming more advanced and human-like.

While this is a plus for good bots, because they’re able to make the online experience even smoother, it means bad bots are becoming more difficult to detect.

As bot software continues to evolve and grow more sophisticated, websites will have to drastically improve their website security and traffic filtration. Distinguishing a bot from an everyday user is only going to get harder.

To stay ahead of these ever-advancing bots,  start your free trial today to see how Anura can pinpoint your sources of fraudulent traffic.

Live Fraud Paper Threat: What You Need to Know