In the race for more clicks, clickbait worthy articles have never been more prevalent. But oftentimes those clickbait articles are nothing more than fake news, designed to drive up views and clicks. However, the short-term gain isn’t worth the long-term pain.

Publishers are losing an estimated $3.5 million to ad fraud daily. And the most common source of ad fraud is fraudulent traffic sources, which go hand-in-hand with poor quality news.

Here’s how publishing fake news makes you more vulnerable to ad fraud, and what you can do to protect yourself.

When a publisher has a particularly juicy article, they want to get it out as quickly as possible to maximize clicks and views. Driving traffic is the quickest way to do that, and some publishers are using risky traffic exchanges to achieve that goal.

Here, a publisher pays for clicks, or links to a potentially non-reputable site in exchange for a link-back. Unfortunately for the publisher, traffic exchanges are ideal targets for fraudsters. And some of those fraudster scams have been huge.

Hyphbot, one of the largest botnets, cost digital advertisers an estimated $1.3 million a day. With Hyphbot, fraudsters used domain spoofing to create fake versions of websites, resulting in views and clicks being “seen” by bad bots instead of real users. Sadly this scenario, albeit on a smaller scale, is all too common. 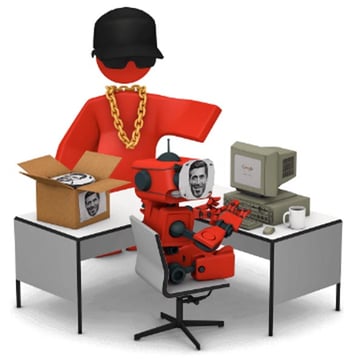 Publishers in their haste to get articles out there, ultimately end up shooting themselves in the foot when they end up on domain-spoofed sites. Those views and clicks not only don’t convert, they cost the publisher money. And it’s all because they opted to allocate their spend on shady traffic exchanges.

Take These Steps to Protect Yourself

In a perfect world, only factual news would be published (and on brand safe sites). But erring on the side of caution, it’s best to take a pragmatic approach. Here are some steps you can take to recognize and protect yourself from ad fraud.

Look For Quality Sites. The quality of a site will equate to the risk of fraud. CNN is infinitely more reputable than say Peggy’s Front Porch News. Less quality sites are more commonly prone to click fraud, so try to steer clear of them.

Related Post: The Evolution of Fake News and Its Impact on Brand Safety

Invest in a Traffic Filtration System. Whether it’s an in-house solution or a third party, make sure you’re using something to compare your metrics against theirs, to ensure you're filtering out bad traffic.

Remember don’t get comfortable. Realize that ad fraud is an ongoing battle. Fraudsters are working around the clock to outsmart the latest fraud prevention tactics. Continually be looking for new signs of fraud afoot. Those little imperfections could be fraudsters at work, and you’ll be able to stay one step ahead of them.

3 Key Ways to Use A.I. for Lead Generation