Ad fraud is when a fraudster attempts to deceive advertisers with fake ads, fake leads, or fake traffic. One insidious form of advertising fraud is impression fraud.

It’s unlikely that even half of paid programmatic impressions are viewed by a real person. Due to impression fraud, advertisers are potentially paying for exposure that never happened. Don’t let yourself be a victim.

Here’s what you need to know.

Understanding the Role of Impression Fraud on Online Advertising Platforms

Impressions are the collective measure of how many times an ad is displayed, regardless of whether the ad was actually viewed. When businesses need their ads seen, they pay publishers to place their ads on websites. The businesses then pay the publisher for every one thousand impressions the ad collects.

Here’s a graphic that illustrates the typical hacker strategy a fraudster uses to conduct impression fraud. It’s unnerving how simple it is. 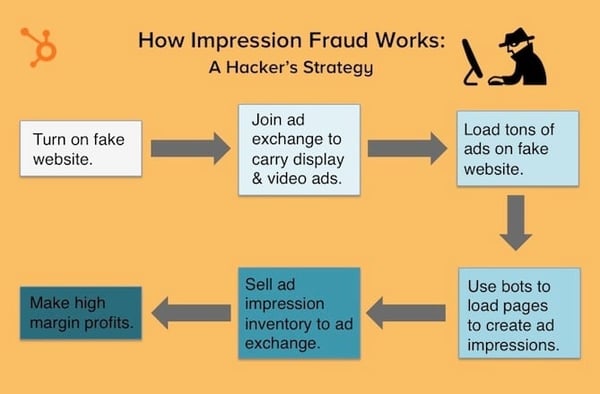 This simplicity coupled with high payout potential creates an irresistible incentive for shady publishers and fraudsters. Without an ad fraud solution, the risk of impression fraud can exist anywhere, especially where ads are placed programmatically.

Impression fraud is when an ad is not viewable to the human eye, but impressions are still counted. The most well-known fraudulent methods are pixel stuffing, ad stacking, and fraudulent traffic. But fraud can also occur within mobile apps and on fake sites created by fraudsters.

Pixel stuffing occurs when a sketchy publisher inserts an ad into a 1x1 pixel on a page so that the ad is not viewable by the human eye but is technically still on the page. Although the ad is invisible to users, it is still counted as served.

Ad stacking happens when a fraudster stacks multiple ads on top of each other so that only the top advertisement is visible. However, an impression is recorded for all the ads, even though they're being blocked by the top ad.

Auto impressions are common on mobile devices where ads will continuously run within an app even when the app is not being used.

Fraudsters create fake websites and sell ad space on those pages. Ads are then placed on the fake website where fraudsters use malicious bots to rack up endless fake impressions. Statistics show that 1 in 5 ad-serving websites are visited exclusively by bots.

Having a lot of ad impressions will look good initially, but you’re not gaining anything in the long run. Thinking you're getting more impressions than you really are will give advertisers a false sense of confidence in their ad campaigns. The grim reality is impression fraud wastes your ad budget. You think you're paying for real impressions, but you're just getting scammed.

If something seems too good to be true, it probably is. When it comes to digital advertising, make sure you know your publisher, and always be cautious of sneaky fraudsters looking to make a quick buck at the cost of your ad budget.