What Is a Data Scientist?

We’re in a data explosion. As industries across the board go digital, from banking and energy to healthcare and retail, the sheer amount of data in existence is simply overwhelming and next to impossible for the average person to process.

But for data scientists, navigating big data is their specialty. Data science is a field dedicated to collecting, analyzing, and interpreting large sets of data in order to extract meaningful information. Based on their research, data scientists can offer solutions to the many challenges faced by businesses and organizations today.

As the field is constantly in flux, the idea of what makes up the perfect data scientist varies from person to person and industry to industry. However, anyone interested in becoming a data scientist should have these general skills under their belt:

Mathematics and Statistics. Like any other scientific field, data science is heavily grounded in mathematics. Strong data scientists should have a confident grasp on linear algebra and multivariable calculus. Probability and statistics also play an equally important role; descriptive statistics and inferential statistics are both key areas of study.

Programming. Modern data analysis is made possible by programming, the process of converting algorithms into instructions a computer can understand. Any good data scientist is fluent in at least one programming language. The most common ones include Python, SQL, and R.

Related Post: 3 Key Ways to Use AI for Lead Generation

Communication. There’s a reason why communication ranks as one of the top skills needed in the field. Data scientists need to know how to effectively explain their processes and findings so that others, especially those without technical backgrounds, can take away actionable information.

Industry Knowledge. A data scientist will thrive when working in an industry they’re familiar with. Having insider knowledge makes it easier to customize experiments and see how any specific research findings may impact goals or metrics relative to the business or industry. 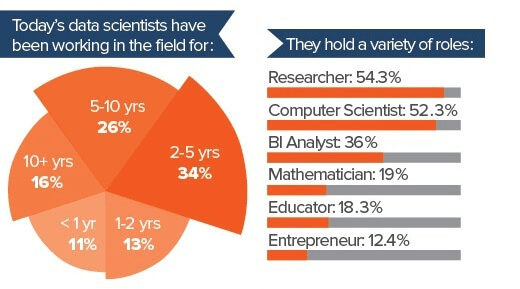 Source: What is Data Science?

Although you’ll find data scientists in many different industries, not all are performing the same types of work. Here are some examples of data science in action within advertising, healthcare, finance, government, and retail.

Advertising. Using algorithms developed by data scientists, many ad fraud solutions track patterns or abnormalities within web traffic to weed out nefarious activity, and in turn, prevent fraud from ruining campaigns. While machine learning and artificial intelligence have automated much of the process, skilled data scientists can pick up on minute discrepancies that computers may miss.

Finance. Improvements in data collection methods has made it easier to analyze data in real time, and in turn, identify consumer financial fraud as soon as it happens. Data scientists have created algorithms that detect suspicious changes in factors like account balances, location, and spending patterns. If any questionable activity occurs, financial institutions can flag accounts immediately before their customers get hurt.

Government. Though certainly controversial, data science plays a part in keeping citizens safe. In the US, the National Security Agency (NSA) runs programs that parse internet and telecommunications data sent across the country and overseas. Due to its confidential status, it’s unclear how the programs detect abnormalities or threats to national security, but officials state their techniques work; in 2013, the NSA claimed their programs thwarted more than 50 terrorist attacks in the US.

Retail. What if you could quantify customer satisfaction and brand loyalty without having to survey every person that buys your products? Well, that’s exactly what sentiment analysis is all about. Data scientists pull textual data from places like social media feeds and online reviews, and then, using natural language processing and other computational techniques, extract measurable sentiments or opinions from the data. Based on the findings, retail companies can make more informed decisions on how to better market their brand or products to consumers.

The world of data science definitely isn’t slowing down. With our increasingly digital society, expect to see a plethora of new ways in which data scientists will shape the not-too-distant-future.

California's Consumer Privacy Law: What You Need to Know

CONSENT Act: What You Need to Know