The evolution of technology, content, and sharing platforms has had a significant impact on brand safety. Compare a print ad being placed in the wrong section of the Sunday newspaper to a family-friendly brand appearing on a Breitbart site. Which seems worse? If you answered the second one, you’re correct. Today’s audience reach on social is much larger than a traditional newspaper’s reach.

Today’s brand safety concerns extend beyond traditional print advertising to include websites, blogs, and social media platforms. Not surprisingly, this has altered the approach marketers and advertisers must take to navigate brand safety.

Here’s how brand safety concerns have evolved over the years.

Back in the day, advertisers would use billboard ads and print ads to entice customers to make a purchase. They were effective methods for that time period, but they weren’t immune to brand safety issues. Poor ad placement had the potential to negatively affect a company’s reputation.

Back then advertisers worried about (and still do today) the following:

Poor Logo Placement. Something as simple as the Starbucks sliding door van fail could transform a basic logo placement and brand name into a negative connotation. Here’s a prime real-life example of poor logo placement. When you close the van door, you suddenly see Starbucks’ logo followed by “Sucks.” Yikes. 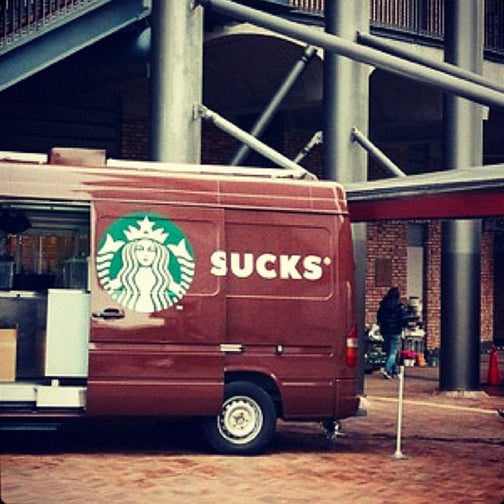 Poor Product Placement. Certain products placed next to items on store shelves could also harm brand safety. Let’s say you see a store display for condoms next to diapers in the grocery store. What would you think? We’ll let you fill in the blanks, but it’s likely nothing good.

Products Being Used Negatively. Products being used for a negative purpose, creating backlash for a brand, is nothing new. It predates digital marketing, and a famous example is the 1994 white Bronco chase involving OJ Simpson. Thanks to Simpson, the Ford Bronco was made infamous. Mention the word Bronco, and people immediately thought of Simpson’s getaway vehicle. Not the kind of press Ford had in mind.

These are just a few examples of brand safety obstacles advertisers had to navigate. Once digital marketing burst onto the scene, these issues evolved into a whole new set of problems.

While digital advertising evolved traditional advertising and increased audience reach, it also opened the door to more brand safety conundrums. These include:

Bad Programmatic Ad Placement. Similar to poor product placement, programmatic ad placement has also resulted in product ads being placed next to non brand safe images and articles, on unsavory websites, etc. A prime example is this ad for a gun sleeve that was placed within the body of a CNN article. The article was recapping the events of the 2017 Las Vegas massacre.

Clearly, neither CNN nor LOKGrips were looking for this insensitive ad placement. And that’s just one example. (Not to mention poor programmatic ad placement can leave your brand vulnerable to ad fraud, too.)

Rogue Groups Hijacking Your Brand. Pop star Meghan Trainor found her brand and likeness being used (without her permission) in an anti-marriage equality ad. The group grabbed her image off the internet and soon spun it into their own propaganda.

Trainor soon found herself have to do damage control. And she’s not the only one. The TIKI torch brand also inadvertently found themselves wrapped up in a brand safety crisis when they were used in a white supremacists rally.

Influencers and PR Disasters. Influencers work with brands to broaden audience reach. But sometimes that can backfire for the brand and vice versa for the influencer. Imagine you’re a top influencer like beauty guru Huda Kattan. You appear in an ad for Sephora, and that ad appears on an unsavory site. Or maybe Kattan gets embroiled in a PR Disaster, now Sephora has to decide whether or not to keep running her ads (no different than the issues Papa John’s is had). Both scenarios can have serious ramifications.

Negative YouTube Affect. In 2017, brand safety cost YouTube 5% of their top North American advertisers. The major catalyst: YouTube ads were found on extremist content channels. This major brand safety issue affected top brands like Netflix, Nissan, Under Armour, and others. It was so bad that Nissan and Under Armour decided to pause their YouTube ads.

What’s Next: Advertisers Must Take Control

In digital marketing, brand safety is fluid. There is no universal rating system, which makes it difficult to enforce and regulate. What counts as negative ad placement for one company might actually be beneficial for another. Even more concerning, YouTube has asked creators to rate their own videos since there is billions of hours of content to police. A creator isn’t unbiased, and most aren’t familiar with what constitutes as safe or offensive content.

By 2025, ad fraud is anticipated to reach $50 billion. Digital marketers and advertisers need to leave behind antiquated mindsets and focus on how to handle brand safety now. What that solution is, is anyone’s guess.