What is Ad Fraud and How Can You Prevent It

Roughly 10% or $7.2 billion of ad spend is lost to fraud each year, and the numbers just keep climbing. Ad fraud not only takes a significant chunk out of your ad spend, it has a trickle down effect. It affects your lead generation, brand safety, and TCPA compliance. And that’s just the tip of the iceberg.

Detecting ad fraud can be difficult if you aren’t sure what you’re looking for, or how it works. Here’s what you need to know.

What is Ad Fraud and How to Prevent It

There are many definitions of ad fraud. Ad fraud is an attempt to deceive advertisers with fake traffic, fake leads, or ads that have zero chance of being seen by humans. It also isn’t just bots doing bad stuff on the web. While it can (and often does) involve bots, fraud can also be conducted by humans (e.g. click farms), too.

For instance, this infographic below shows a human hacker’s strategy for using impression fraud. In just six steps, a hacker will successfully execute an ad fraud scheme. Scary how “simple” it is, isn’t it? 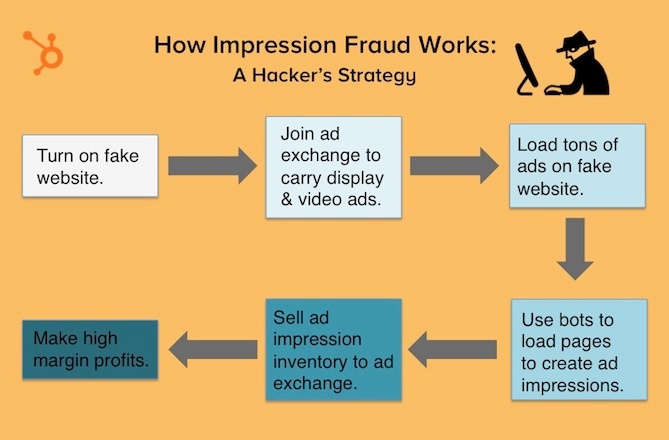 Now that you have a general idea of what is ad fraud, let’s explore the different types and how they work.

How Does Ad Fraud Work?

Impression fraud is just one type of ad fraud. Fraudsters use a variety of methods to trick unsuspecting advertisers into doing business with them. On the surface, these forms of fraud might appear legitimate to an unsuspecting user, but a closer look says otherwise.

Click Fraud. Click fraud is the most common form of ad fraud, occurring through automated clicking by bots or click farms. It’s used to create fake impressions, making it look like an ad has drawn more traffic than it really has.

Search Ad Fraud. Fraudsters use keyword stuffing to make their phony websites appear higher on search engine results. Advertisers then buy ads on these fake sites with the false hope that their ads will be seen.

Ad Stacking. Sketchy publishers superimpose a number of ads on top of each other, but only the top ad is visible. Meanwhile all of the ads are registering false impressions.

Domain Spoofing. Fraudsters misrepresent their sketchy sites as legitimate by making the URL appear to be a trusted domain when it’s really not. For example, perpetrators might swap a lowercase “l” for a capital “I” and create a domain that looks like that of a credible company. The advertiser thinks it is a legitimate site, but it’s really a spoof created by fraudsters.

Pixel Stuffing. Perpetrators will shrink an ad to a one-by-one pixel size on a page. These ads are invisible to the human eye, but will still register impressions if there is traffic on the page.

Also keep in mind that ad fraud schemes can be conducted from anywhere in the world at any time, so watch out for sketchy IP addresses.

The biggest roadblock in eliminating ad fraud is the fact that it’s not technically illegal, just highly frowned upon. So, it’s up to you to protect yourself.

Related Post: Ad Fraud: The Most Deadly Types You Need to Know

In addition to knowing the types and signs of fraud, consider using an ad fraud solution, too. Working with an ad fraud protection like Anura will help you keep your business safe from illegitimate traffic and malicious bots, hopefully saving you time and money in the long run.