Influencer fraud is a growing problem for a market that’s worth $1 billion. Years ago, influencers had to grow organically, but after new technology emerged and brands started paying big bucks for ad campaigns, the incentive for fake popularity was born.

With the ability to purchase followers and engagement in one click, it’s become a lot easier to fake it ‘til you make it.

The Power of Social Media: Influencers Are Becoming More Influential

70% of Millennials perceive influencers as more trustworthy and influential than well-known celebrities. Digital influencers account for 33% of an audience’s trust, while celebrities only account for 5%. Influencers serve as a bridge between the consumer and the brand, helping to develop a meaningful relationship.

As influencers become more influential, the price marketers are willing to pay is also rising. There seems to be a lot of opportunity that comes with influencer marketing, like partnering with brands you love, receiving free products, and getting a comfortable compensation for creating content. And it’s easier now than ever before.

How Influencers Contribute to Ad Fraud

When brands decide to work with influencers, they’re paying for exposure to the influencer’s audience. But if the numbers are inflated or the followers are fake, brands don't get the exposure they bargained for. And this creates a big problem for the advertising industry.

Social media platforms like Instagram are saturated with fraud. High paying ad campaigns and a false sense of popularity create an incentive for influencers to use fraudulent methods to get ahead. It seems like the fastest and easiest way to rise to internet popularity is by faking it. Fraudulent influencers buy likes and followers, use bots, and participate in shady engagement pods to trick the algorithm and inflate their numbers.

Engagement Pods. Because of algorithm changes, Instagram no longer shows posts in chronological order. Instead, posts are shown according to popularity. So, the better a post does in terms of engagement, the more users it will be shown to.

Instagrammers can use engagement pods to trick the algorithm into thinking their post is high quality so their post will be spread to more users. Participants need to engage with hundreds of posts from other members, so they often outsource bots to complete the job.

Bots. Using bots is against Instagram’s terms and conditions, yet users still get away with it. Bots can be programmed to do almost anything, from liking pictures related to certain hashtags, to spamming comments, to continuously following and unfollowing users.

To spread their reach, users will purchase bots to send out generic and uninspiring comments in hopes other people will look at their pages, appreciate their content, and then follow them. Just check out these five botting examples:

Would you want to check out one of these pages knowing that the comments aren’t genuine? Probably not. Context matters, and bots don’t understand that. This can potentially create a big brand safety problem for marketers. 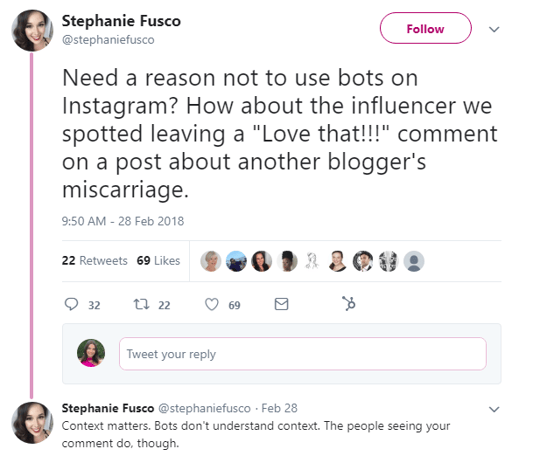 Bought Likes and Followers. Two words: inflated authenticity. That’s what happens when fraudulent influencers buy likes and followers to make it look like their profile is more popular than it actually is.

It’s ridiculously easy to rack up followers; just search “buy followers” and the options are limitless. For just $40, users can be 5,000 followers richer. However, just because it’s easy doesn’t mean it should be done.

Remember, just because something looks good on the surface doesn't mean it’s legitimate. Members of engagement pods, bots, and purchased likes and followers won’t buy what you’re selling, so if you partner with an influencer who uses these methods, it won’t benefit your business. They’re just engaging because they have to, or are programmed to.

However, if you carefully select legitimate influencers to work with, you’ll have no problem getting your #sponsored posts to real human eyes who might be interested in what you’re offering. Influencer marketing is still a valuable thing, so long as it is used effectively. Gain more knowledge of bots in our free eBook, Bots 101.

What Is a Data Scientist?