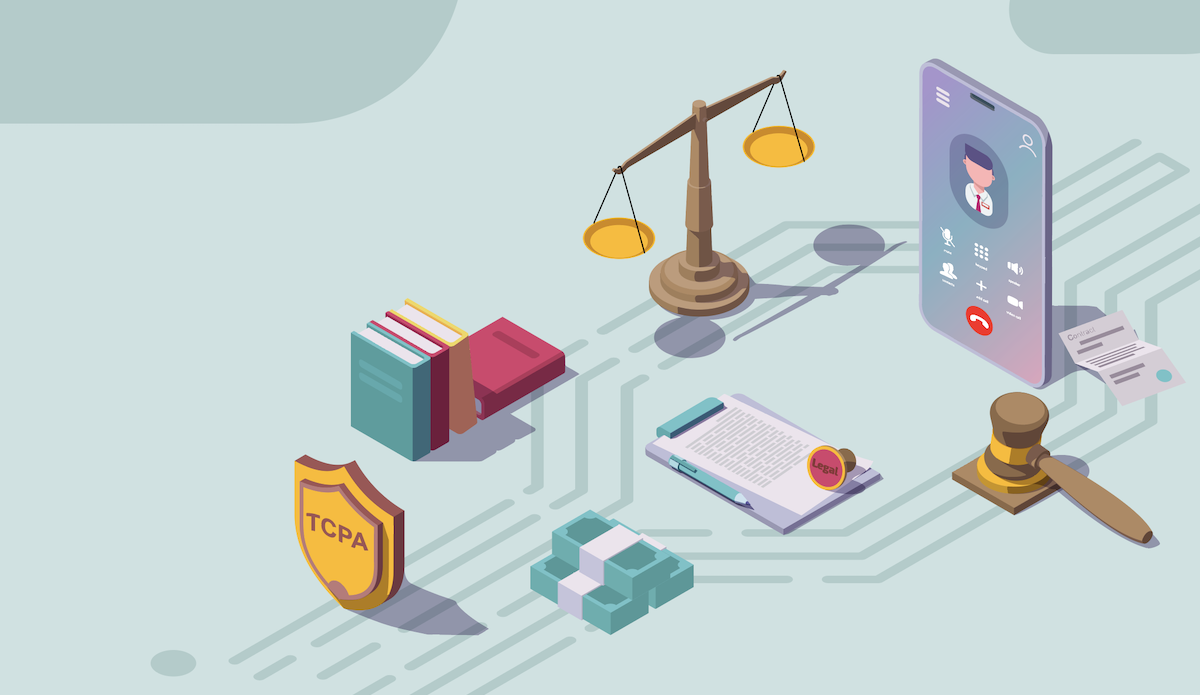 The Telephone Consumer Protection Act of 1991 (TCPA) was a landmark Federal Communications Commission (FCC) rule that was an “effort to address a growing number of telephone marketing calls” enacted by Congress.

TCPA restricts the use of telemarketing calls and automatic telephone dialing systems that have contributed significantly to the growth of nuisance calls to American consumers. Additionally, the TCPA creates a corporate liability for companies to maintain their own organization-specific “do not call” lists to prevent them from making unwanted communications. Failure to comply with the rules of the regulation can result in fines, but that isn’t the only risk it poses.

The end result is a large, messy, and lengthy court battle that draws a lot of negative PR and high legal bills.

Let’s take a look at some basic data about class action suits arising from TCPA compliance issues, potential causes of noncompliance, and what you can do to protect your company from them.

How Often Do TCPA Lawsuits Happen?

A Seventh Circuit court ruling from August 10, 2021 could potentially expand the corporate liability for businesses that had previously been acting through third parties to distance themselves from TCPA violation risks.

Additionally, another ruling from December 18, 2020 may make lawsuits filed on the basis of using pre-recorded messages more “viable” than before. Such legal decisions are making it easier for classes to file suit against companies.

So, although the total number of lawsuits has gone down between their 2016 peak and 2021, recent court decisions may be increasing the risk of getting sued over TCPA violations (and losing the class action).

How Does Ad Fraud Increase Your TCPA Risk?

This assertion is backed by Eric J. Troutman, a top TCPA defense lawyer, who said that: “If you are a buyer of leads, ad fraud may be your biggest risk right now.”

How does ad fraud contribute to a violation of TCPA regulations? By generating fake leads and feeding them into your sales funnel. Here’s the basic outline:

In this way, ad fraud directly contributes to your risk of getting sued for violating TCPA—which can be extremely costly for your business.

How Much Can a TCPA Class Action Lawsuit Cost?

So, what’s the potential damage that a TCPA lawsuit can do? It was estimated that U.S.-based companies spent a total of $2.9 billion just on defending against class actions in 2020—though this is for all types of class action suits, not just TCPA suits (Source: Carlton Fields Law Firm).

The issue is that there isn’t really a hard, fast rule for determining how much dealing with a class action suit will cost. Like any lawsuit, there will be a combination of direct and indirect costs to consider.

Some of the direct costs of defending a TCPA class action include:

Indirect costs are often harder to quantify during a class action lawsuit because they don’t show up in your lawyer’s bill for services rendered. Some examples of indirect costs include:

The actual cost of a TCPA class action can vary wildly depending on the size of the class, the strength of their case, how long you battle the class action in court, and how much media buzz the case generates. It isn’t unusual for a company to spend tens or even hundreds of millions of dollars on such lawsuits (possibly even more).

Generally speaking, the larger the class and the harder you fight the case, the more you can expect to spend on your case. Meanwhile, settling early can help to minimize costs. For example, HelloFresh settled a TCPA class action for about $14 million in October 2021. In April of 2019, a jury found against a company called ViSalus in a class action suit totaling $925 million in damages.

How Ad Fraud Solutions Can Help Protect Your Company

Some companies opt to include clauses in their service contracts limiting a consumer’s ability to join a class action case against the company. However, this really doesn’t apply to TCPA class action lawsuits, since the members of the class haven’t entered into an agreement with the company being sued—the suit wouldn’t be valid if they had agreed to receive marketing and sales communications in the first place!

Because fake leads from lead generation fraud efforts are such a major contributing factor to TCPA violations (and thus, to class action lawsuits from those violations), one of the best things you can do to protect your company is to use an ad fraud solution.

With a reliable ad fraud solution, you can check your website visitors in real time to determine whether they’re legitimate or fake. Anura compares hundreds of data points about each website visitor to a massive database with over a decade’s worth of real conversion data. This makes positively identifying fraudulent leads and weeding them out of your ad campaigns easy and before you call them.

Why wait until after you’re already battling a class action from TCPA violations? Protect your business and get rid of bad leads now! The risks are too high to ignore as just a “problem to handle sometime later.”

What to Do About Bad Leads in Your Online Ad Campaigns

END_OF_DOCUMENT_TOKEN_TO_BE_REPLACED

Stay ahead of fraudulent lead hurting your campaign performance. Get our Lead Generation Fraud 101 eBook!