Introduced by Facebook in 2009, the like button quickly became a standard social media feature, with iterations popping up on Instagram and Twitter. Originally it was meant to show an emotional response; you literally “liked” the posted content. In 2010, the like button replaced Facebook’s “Become a Fan” feature on Pages, a move made to maintain consistency sitewide.

Now lauded as the currency of social media, likes are often used by marketers and advertisers to measure popularity and engagement. However, when it comes to garnering likes, quantity isn’t always better than quality.

Instead of organically building an audience, some marketers buy thousands of “real” likes from seemingly harmless online companies. What they’re actually buying are fraudulent clicks. Using bogus accounts and bots, fraudsters click away at Facebook content, liking pages and posts with no intentions of converting.

The Problem With (Fake) Likes

Facebook uses your page’s engagement rates to set parameters on how to deliver your posts, including ads. High engagement tells Facebook that your page is legitimate, increasing your posts’ chances of reaching real users. Having thousands of unengaged “fans” liking your page will just drag your engagement rates down, and in turn, ruin any future paid and organic campaigns.

Buying fake likes also skews your analytics data. The like button is a key tool in building user profiles. Facebook can map out a person’s demographic and psychographic info based on what pages and posts they like. This is a huge asset as you can easily drill into your audience stats. But if half the audience is built on fake likes, those stats won’t be accurate.

Purchasing likes isn’t technically illegal, but the practice does go against Facebook’s terms of service. The platform has issued statements against phony likes, emphasizing they will “aggressively go after the bad actors behind fake likes because businesses and people who use [their] platform want real connections and results.”

But are they really delivering on that promise?

Fake Profiles Are Easy to Create

Creating a Facebook account is supposed to be a straightforward but secure process. Anyone who wants to create an account needs to provide basic information, including a full name, a valid email address, a mobile phone number, and a birthdate.

Out of curiosity, I tried opening a second Facebook account (which is against the terms of service) using all the same information, aside from my email address, I provided for my main, active account. To my surprise, not only did Facebook let me open another account, but the network verified the new account via text to the same mobile phone number.

Within seconds, I got an email alert from Facebook telling me that they removed my mobile number from my main account because “it was registered and verified by another person on Facebook.” Funny, that other person was me. 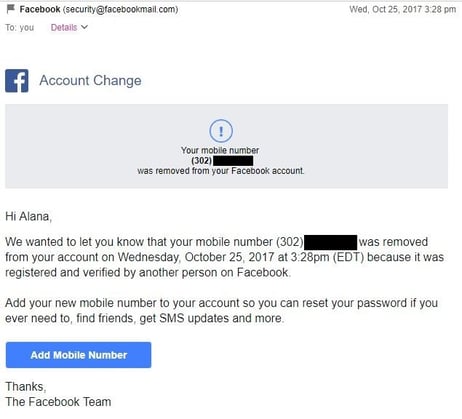 So much for security.

If this simple experiment is any indication, Facebook’s text message verification system does little to prevent fake account creation. And people are exploiting this flaw to the fullest.

An investigation by Doug Bock Clark for New Republic examined the underground world of click farms. In his visit to an “account farm” in the Philippines, Clark observed how fake users are made for commercial purposes.

A farm worker starts building a fake persona using readily available name generators. Some generators spit out only first and last names, but others go more in depth, randomizing info like mailing addresses and birthdays. Next, the worker creates a throwaway email account for the “user.”

Then comes the actual Facebook sign-up. The “user” has a name and an email address, but Facebook wants a mobile phone number too, for verification purposes. No worries, the worker’s got that covered. A new SIM card in an old cell phone will do the trick.

Facebook sends a confirmation text, the worker types in the code, and just like that, a new, verified user joined the network, adding to the estimated 81,000,000 fake users on the site. Farm owners can then sell the “user” for likes and follows.

We already know the text message test is easy to beat. But Facebook has other measures in place to weed out fake accounts. The network uses an algorithm -- one they won’t disclose -- to determine if users are real or bots.

However, depending on the account farm’s production standards, fake user profiles usually pass the test. The more legitimate the profile appears, i.e. the more information is filled out, the less likely Facebook will flag it as fake.

It also doesn’t help that actual humans, not software, are the ones setting up and controlling the accounts. Because real people are behind the scenes, account actions, such as liking posts, seem more organic compared to bot behavior.

What You Can Do to Protect Yourself

With fraudsters one step ahead of Facebook’s security efforts, you shouldn’t rely entirely on the social network for protection. Luckily, you can guard your Facebook presence from click fraud by following these easy tips.

First of all, do not buy likes or followers. You’re wasting money, you’re funding a sketchy industry, and you’re ruining your page’s reputation. Buying 10,000 likes will do nothing to your bottom line. In fact, strong marketers know that likes are a terrible way to measure marketing success.

Setting strong targeting parameters around your Facebook ad campaigns gives you another layer of protection against unwanted clicks. The social network made it easier than ever to target users specifically by metrics like location, age, gender, and interests. You can even use metrics to exclude groups of users from seeing your ad.

If you’re running a business page, it’s a good idea to periodically check your follower list for questionable accounts. In your Page settings, click on People and Other Pages to view a list of your followers. Here, you can individually remove or ban accounts you deem suspicious from engaging with your content.

Click fraud on Facebook is a messy, muddled reality, but with careful planning and a healthy dose of common sense, you can take steps to minimize its effects on your business. Focus on organic growth, engage with authentic users, and take advantage of niche targeting to connect with real fans and rule out the bad actors.

What Role Does Click Fraud Play in Affiliate Marketing?
See All Articles